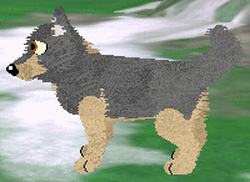 River
River is a pretty easy going alpha. He prefers to hang out and resolve conflicts peacefully. That being said, he is extremely protective of his small pack and anyone threaten it or his territory, he would shred their pelts.
​Update: River found that is first born Soft, now named Leaves, was too aggressive and dominant to work with the pack. Therefore, the young sire unceremoniously ejected the young male. Without further adieu, River has focused all his efforts in caring for his new litter in the hopes that one or two will actually stick with the pack when they are grown.
Rank: 1
alpha female - pine 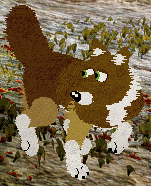 Alpha Female
Pine: A very feisty female, Pine is a bit the opposite of River: she has no problem jumping to hostile conclusions and meeting them with impulsive, hostile responses. However, she usually follows River's directions and therefore doesn't often get their little family group in trouble. She's calmed down since she had Soft.
Update: Pine has become pregnant with her second litter of pups; her feisty nature seems to be calming down the older she grows.
Update Two: Pine was somewhat sorrowful to see her firstborn go, but finds little time for anything but the careful raising of her newest litter.
Rank: 2
pup - Whine

Warm
Nearly identical with her sister, warm otherwise is not particularly interesting at this point.
​Rank: TBD
pup - sharp

Sharp
Other than her striking coat, Sharp really hasn't done anything to distinguish herself yet. (I like to imagine she nipped her mother when she was born though... Hence the strange pup name)
​Rank: TBD
pup - squeak

Squeak
Other than her gentle colors, Squeak hasn't had enough time to distinguish herself.
Rank: TBD
Image Gallery Newest to Oldest